BLOG
The Minister Pedro Duque inaugurates the first European incubator of 3D printing business projects in the Zona Franca of Barelona
Press
It is the only incubator focused on additive manufacturing (3DP/AM) that is part of the network of European high-tech incubators promoted by the European Union. The new facilities are part of the strategic Project DFactory that is being developed in the Zona Franca Industrial Estate. The construction of a new building of 17,000 m2 will start in the following months and this will be the first phase of an Economy 4.0. hub in Barcelona. 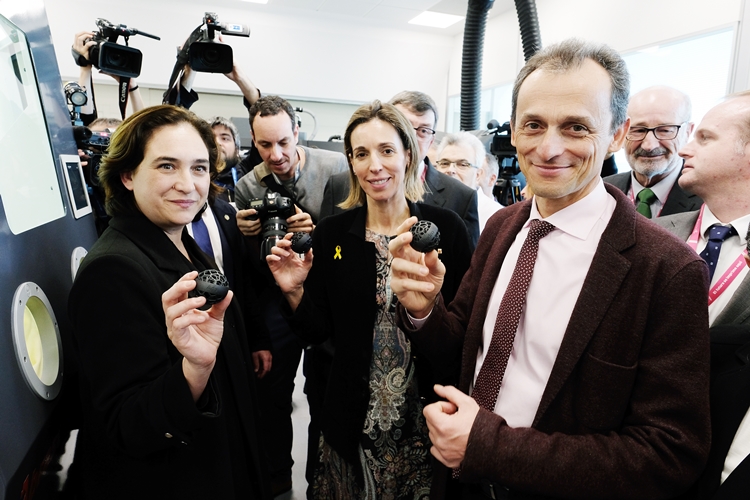 The Minister of Science, Innovation and Universities, Pedro Duque, has inaugurated today the first European incubator of high-tech 3D printing, the 3D Incubator, an initiative led by the Consorci de la Zona Franca de Barcelona (CZFB) and the Fundación Leitat, financially backed by the ERDF funds through the INCYDE of the Chambers of Commerce.

Barcelona’s Mayoress and President of the CZFB, Ada Colau, the Special State Delegate to the CZFB, Pere Navarro, the President of Leitat, Jordi W. Carnes, the President of INCYDE, Jose Luis Bonet, and the Minister of Business and Knowledge of the Government of Catalonia, Àngels Chacon, amongst other authorities, have also attended the opening of the Incubator.

The Minister Pedro Duque has said, referring to the Incubator, that “initiatives like this one are a good example of how the European Regional Development Funds (ERDF) are being used and of a public-private collaboration created to promote growth. This growth is based on knowledge and innovation, exactly what our country needs in order to keep advancing towards the future”.

The Mayoress of Barcelona, Ada Colau, has considered that the Incubator “launches the Barcelona metropolis as one of the largest innovation hubs of the South of Europe. Advances in 3D printing will drive local production and, specially, SMEs, that grow and develop themselves within a strategic sector that promotes quality employment, for instance in the technology sector. Barcelona puts itself a step forward in terms of producing and working in a more sustainable and efficient way”.

The Minister Àngels Chacón has highlighted that Catalonia "has 90 companies linked to 3D printing with a turnover of more than 240 million euros" and stressed that this ecosystem and the existing start-ups is already a solid foundation for the takeoff of this new production technology.

The Delegate Pere Navarro has highlighted that the 3D Incubator “shows the changes in how we manufacture, because the factories of the 21st century can be located in an office building like this one. Production models tend to cooperate and that is why we have in front of us a factory of opportunities for our productive sector. Furthermore, the Incubator is the embryo of the Economy 4.0 DFactory that will start being built during the spring”. Navarro was referring to the future construction of a technological area of 17,000 m2 in the heart of the Zona Franca Industrial Estate.

Jordi W.Carnes, from Fundación Leitat, has mentioned that this collaboration between Consorci and Fundación Leitat “shows the evolution towards the industry of the 21st century, because we are a country that does not want to renounce to industry, and we participate in re-defining it so it can keep positioning itself as cutting-edge”.

The President of Fundación INCYDE, José Luis Bonet, has stated that the high-tech Incubator “perfectly encompasses what the Chambers of Commerce want to be in the 21st century: changing agents, digital transformation and progress agents, and doing so always through a public-private collaboration, working together and bringing all efforts together. Our compromise and responsibility is to serve businesses and society in general”.

A unique bet in Europe

The objective of this new high-tech Incubator is to promote the growth of initiatives tied to 3D printing through the creation of a space for the incubation of SMEs and micro-companies related to these technologies of Industry 4.0. The Incubator is 50% financed by the European Regional Development Funds (ERDF), through the Multiregional Operational Programmes for Spain 2014-2020, and operates under the main point number 3: Improvement of SMEs competitivity, awarded through the Fundación INCYDE.

The Incubator is located in the headquarters of the Consorci de la Zona Franca de Barcelona, where it occupies a total area of 600 m2. The incubation zone includes co-working areas, offices, design, production, post-processing and training areas and also meeting rooms. It also offers businesses a wide range of services along the value chain: production, business consultancy, market launch and certification. It is equipped with 4 state-of-the-art industrial 3D printers, 3 mini printers, and also post-processing, design and metrology areas.

With an investment of 3 million €, this initiative of industrial and technological projects expects to “incubate” more than 100 business projects in the next five years as it is able to host 25 projects a year, and it also has technical capacity to offer virtual business services.

The 3D Incubator launched a call a few months ago and 43 3D printing initiatives responded, of which 34 met the entry requirements. We are currently enrolling these entrepreneurs and businesses so they can use the Incubator’s services, a process that will finish in the following days.

The Incubator wants to invigorate the productive transformation of the small and medium enterprises towards the Economy 4.0 environment so that together with the Strategy UE2020 objectives and Horizon 2020 it will help promote interregional cooperation, and also collaboration between public and private sector agents both on a national and international level.

3-Dimensional Printing (3DP) technology has emerged within the generalist frame of the Economy 4.0. 3D printing and, especially, its intensive use of the manufacturing system, will redefine production systems by increasing the customization of the product, the reduction of inventories, waste footprint and environmental impact and, therefore, increase the competitiveness of local production systems.

Since this technology is so innovative, large-scale investments in research and development are still necessary, as are incubators and transfer spaces.

The Consorci de la Zona Franca de Barcelona is a public company which is entirely self-funded with rent from properties on the Zona Franca industrial estate and property management. With a mission to drive the economy, its plenary is made up of representatives  from the Spanish Government, the Barcelona City Council and the main financial organizations in the city. Its corporate focus has been set in contributing to the transformation of small and medium enterprises towards Economy 4.0 and also to boost disruptive technologies such as additive manufacturing.

Leitat is a Technological Institute with a history that spans more than 100 years, with 300 employees, five headquarters in Terrassa, Barcelona, Vilanova del Camí, Valencia and Chile, and a budget of more than 30M€. Its mission is to collaborate with companies and other bodies to create economic, social and sustainable value through R+D+2i projects and technology processes from innovation and creativity. Leitat is recognized by the Government of Catalonia (TECNIO) and by the Minister of Economy, Industry and Competitiveness.

Fundación INCYDE is an institution created in 1999 by all Spain’s Chambers of Commerce, dedicated to fostering a spirit of entrepreneurship and consolidation of companies through innovation. Inspired by the entrepreneurial spirit of the Chambers of Commerce, it fulfills its training and structural role in its training programs, as well as in the digital co-working and Advanced Technology Incubator Networking that the foundation makes available to new entrepreneurs. This way, INCYDE covers all the stages of a business project, from improving the idea to its incubation, acceleration, access to funding and maturation.

To date, INCYDE has invested more than €250MM in Spain and other countries and has created Europe’s largest business incubator network, with 143 hubs working in a network, 11 Advanced Technology Incubators and a network of digital co-working. Since 2002 more than 4,420 companies have incubated within the INCYDE facilities.